In late 2014 the delivery team working on the Copyright Hub as part of the Digital Catapult UK where a bit confused about the upcoming Beta Release. They were getting mixed messages regarding what the release was for, when it was due, and what were the most important features to be included. To resolve this situation I gathered the delivery team and the customer representative and ran a collaborative Release Vision Exercise, which is described below.

Who?
Who is the audience of the beta release?

What?
At a high level what will the beta release contain? Aim for no more than five bullet points.

Where?
Where will it be used? All industry sectors? All parts of England? Europe, etc.

Why?
Why would the users and stakeholders make the painful effort to change their existing habits and migrate to this new product? 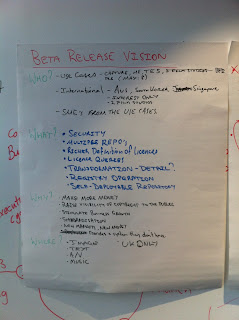 Strap Line…
What is a one sentence summary that we could use internally? LITMUS TEST: Can the delivery team come up with a strap line that they and the customer representative agree with? 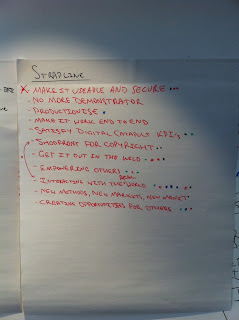 The list was brainstormed, then discussion followed by dot voting determined the winner.


Release Levers (10 minutes)
What is the order of importance of the following items? Please note they must be ordered, i.e. there cannot be two priority one items. 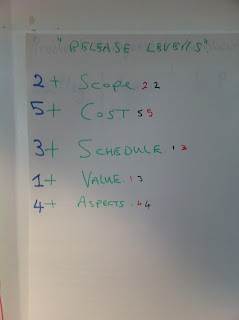 The blue numbers are the aggregate result of the Product Owner and Customer Representatives separate votes.

This process surfaced some key issues that the customer representative and Business Analyst (acting as Product Owner) disagreed upon and allowed them to resolve these differences. It also provided clarity to the delivery team regarding what they were being asked to do. The end result was a successful release that has changed the face of copyright on the internet forever.

Posted by Andrew Rusling at 1:02 PM