Story Points are only one third of the reason for estimating


“One’s destination is never a place, but rather a new way of looking at things.”
From: Miller, H. (1957). Big Sur and the Oranges of Hieronymus Bosch

Assigning some Story Points to a User Story may seem like the point of agile estimation; however in my eyes it just signifies the end of the process.

For me the goals of agile estimation are to build a shared understanding in the team of what the story is and to build team consensus around what the rough estimate in Story Points should be.

The journey that the team goes through to come up with the estimate, is more important than the number that is assigned at the end of the process. Sure the assigned estimate assists with planning, however the knowledge that the team gains during discussion will help with their understanding of what they are delivering, why and how they will go about it. I often hear discussions on topics such as: user needs, business value, design, potential new User Stories, testing approach, development approach, how this User Story fits into the Epic, which are all valuable.

Here is a brief summary of the benefits that the team gain by going through an agile estimation process.


Using consensus to arrive at the Story Points supports

Posted by Andrew Rusling at 7:05 PM No comments: 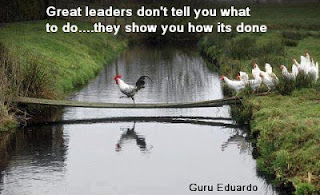 Iteration Managers/Scrum Masters should not just be managing their team. They should be providing the team with leadership that helps them to achieve great things to together.

Self-organising doesn't mean they don't have an Iteration Manager, it means they can function without one. An Iteration Manager will always be there leading them onto a greater success then they could achieve by themselves. That is what great leaders do.

This article is available in presentation form on SlideShare: Iteration Manager to Iteration Leader.

Photo Credit: I was unable to find the owner of this photo. Please contact me if you own it.
Posted by Andrew Rusling at 4:55 PM No comments:

This is a brief summary of my experience of running a World Café.

I volunteered to run a World Café, themed around Organisational Impediments and how to solve them, for my local agile Meet-Up group ‘Brisbane Agile’*

I deliberately kept my preparation to a minimum. I held some discussions with the Meet-Up Organiser, regarding how we would run the event and set up the room. Apart from that I created a few wall charts to help smooth out proceedings and came up with some sample Organisational Impediments. These were a backup in case the participants were reluctant to volunteer their own items for discussion. This word document contains the wall charts I used.

We set up the room with five groups of tables that seated about six people each. Seating for thirty people was wishful thinking, by the start time we had two full tables. The low numbers were probably due to the event being event in the Christmas season.

While guests were entering and eating the free pizza, I wondered around introduced myself. Asking what had brought them here and suggesting that they post their question or topic on the provided wall charts. From member I think we ended up with eight topics being suggested by the participants.

After brief introductions from our sponsor and the meet-up organiser, I got everyone on their feet and used dot voting to select two of the eight suggested topics. There were a couple of clear winners, which made it easy to start the two tables discussing each topic.

As a group we decided as a group to drop down to ten minute discussion rounds. This allowed us to get through four topics in total.

I time boxed us to ten minutes of discussion, followed by a couple of minutes to switch tables and then another ten minutes of discussion. The conversations that occurred where very animated. It was a real struggle to stop them and get us on to the next round. After the first topics had been discussed by both groups we had the topic leader provide a quick overview which sparked even more discussion.

With roughly half of our planned time used up we used dot voting again to select another two topics and do it all again. Again we had very energetic discussions, which were constrained by the ten minute boundary.

The result was these sheets of butchers paper, which fail to convey the excitement and energy that was in the room. 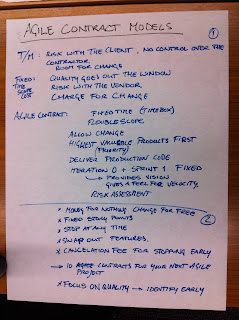 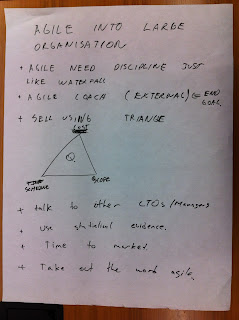 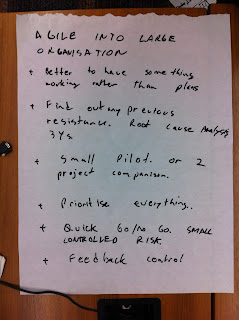 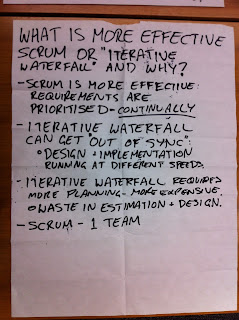 Result: What is more effective Scrum of Iterative Waterfall and Why? 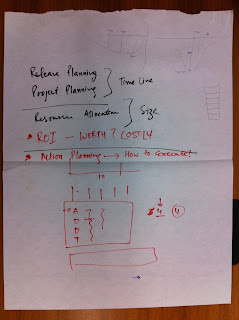 We ended up with some very satisfied attendees. Some left with a much better understanding of agile, another walked away with an action plan for how he will sell agile to the management group in the company he has just joined. Everyone seemed to walk away happy.

I whole heartedly recommend you to run your own World Café; it is easy to set up, exciting and harness the energy of the participants.

*At the time of the World Café it was actually a separate group ‘Brisbane Scrum and Agile’ Group, however it has since merged with the ‘Brisbane Lean and Agile’ group to become ‘Brisbane Agile’.

Photo by: Travel Fools of America
Posted by Andrew Rusling at 9:37 PM No comments: